Nothing that is Not Sacred 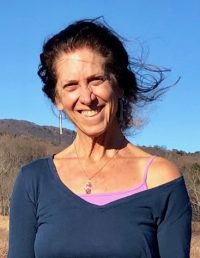 inform why I’m still Jewish and why I chose to go to rabbinical school. “Care for the stranger”, zecher l’tziat mitzrayim, the commandment to remember that the very reason that we were taken out of the narrows of Egypt was so that we could know that our liberations are tied to each other.

It was the anchoring element of the Judaism I was raised with in New York City in the 1970’s-1980’s. It was an unspoken principle and practice in our living rooms, seder tables and kitchens…this cellular knowing that our freedoms are interwoven with each other. As a kid I marched with my mom at Racial Equity in Education marches, actions by the teacher’s union alongside marches for Soviet Jewry. In both activist communities we sang songs of freedom in Hebrew, Yiddish and songs/prayers and spirituals from the civil rights movements. My mother, an English teacher at BMCC, would take me out of school for ‘learning’ days where we would go to intimate black box theatre spaces in Harlem to performances and readings by Ntozake Shange, Angela Lansberry, Nora Zeale Hurston, Toni Cade Bambara, Richard Wright and others. I was 11, 12, 13, 14. Black feminist and Jewish socialist feminist epistemologies and theologies were woven into daily life…the sacred and political were interwoven, and any boundaries that others might have named, were transgressed by my mom, who transgressed many of the norms imposed by the dominant Christian hetero-patriarchy.

My mom smuggled mezuzot, haggadot, siddurim and chanukiot on her trip with other Socialist-leaning English teachers on their City University of New York trip to the Soviet Union in the late 1970’s. This was the Jewishly grounded, social justice ethos with which I was raised. Be curious, inquire, encourage others inquiry, support literacy of all kinds, sing and pray together and keep holding each other’s hands.

I was inspired by the religious rhythms of Judaism in my youth. Each Wednesday evening brought the energy of upcoming Shabbat. You could feel the excitement in our home. While my parents never used the word Kabbalah, the anticipation of Shabbos that the Jewish mystics wrote about, the “bo-i kallah”, was sparkling and vibrant by Wednesday. Shabbat was already, a little bit in our week. While I hadn’t heard Heschel’s language of a “sanctuary in time”, that sanctuary held pulse in our home even before the three stars showed up in the night sky on Friday evening at sunset. While we engaged in the ritual of havdalah, my Dad, my first rebbe, charged us with bringing a little bit of Shabbos into our week–pretty wild for a man with a 9th grade formal education, tailor by day and, as an avocation, lover of Torah, davennen, music, salsa and tap-dancing at the Apollo and Roseland when he wasn’t cutting patterns on 47th street and 7th Avenue.

In addition, I had a dose of this Shabbos for seven weeks each summer at Ramah Camp between ages 8-16. No words of ‘Jewish mysticism’, but a deep-felt sense and practice– shacharit by the lake each morning, in forests of wild blueberry bush/trees and free roaming cows in full sight, through the wooded path; thinking about what white fabrics I might want to drape around my kid body for Shabbos; Ssthe joy and deliciousness of Israeli dancing after dinner on Friday night… the felt sense and images of that bubbling up on Wednesday.

This was a Judaism that was alive and vibrant in my body, in our bodies and in our collective body. There was and is immense power in this communal embodied knowing, communal embodied ritual, which I think allowed for our collective healing… though, of course, we didn’t know the labels for any of that in 1978. We simply lived it. And this perhaps is the residue of what is good from our ‘tribal’ Judaism…that we need each other to celebrate and to grieve.

Friday night Shabbat dinners at home were full-fledged Kabbalat Shabbat chanting, singing, guided by the malachim(angels) and the extra ruach (spirit) and neshama (soul) in each of us, including our family friends. We often had more friends around the table who were not Jewish, than Jewish. Our Shabbat guests included Italian and Irish Catholics, African American Methodists and Baptists, Caribbean and Southeast Asian friends, Muslim, Hindi, Buddhist, Dominican and Puerto Rican Americans. We would sing African American gospel melodies for L’cha Dodi, and corn bread and nan were on the table in addition to challah, a table that was our collective ritual altar, though no one called it that. But the Shabbos table, like the Passover Seder table is an altar, that we collectively compose and create, invoking our experience of the sacred. We no longer have the altar of the Temple, but I think now, that altar, lives on in our kitchens, part of bringing the sacred into our daily lives. Our homes are our sanctuaries. Our tables are our altars and our foods are our offerings.

We lived, conversed, argued and loved, in each other’s kitchens and living rooms in the late 1970s, early 1980’s. We were working class families who had to take care of each other, because we couldn’t afford to “buy” a community by being sent to private school or be taken care of by hired child care providers. We went to each other’s homes, were cared for and scolded by each other’s mamas, ate in each other’s kitchens, listened to each other’s struggles, family challenges and heard each other’s prayers. I was once told that if we didn’t hear one another’s prayers, we might soon be hearing the howls of each other’s war- cries. At our dinner tables, we talked about uncomfortable stuff together–Israel/Palestine; what was happening with healthcare; education, feminism; anti-semitism; the Black liberation struggle in our country; who had and who didn’t have. It was rich, uncomfortable, edgy, connecting, difficult, vibrant and real.

I deeply resonate to the principles that Rabbi Sid Schwarz suggests are the key to building healthy, vibrant Jewish community in his book, Jewish Megatrends–wisdom, social justice, intentional community and sacred purpose. While this may not have been the language that we used, all of these principles were very much alive in my home and the homes of those I grew up with in our multi-faith, multi-cultural, multi-racial and multi-ethnic neighborhood of Washington Heights. And then later, in White Plains. It wasn’t just a Jewish thing. It was a human thing. Not until I got older and reflected, did I realize how it lived in the cells of my body and in the bodies of those families in our schools, shuls, apartment building and neighborhoods. My Puerto Rican and Dominican friends could chant the motzi, kiddushand the bracha over Chanukah candles. I could sing to Yemaya, the Ocean Mother Goddess in Santería, an Afro-Caribbean religion down at the edge of the Hudson River on 181st Street.

The Jewish community somehow forgot these ways of being in relationship with other cultures and wisdom traditions. In connecting with others who come from different traditions/spiritualities/faith paths, we can deepen into our ancestral practices, be less afraid of each other and learn from one another in that fertile ground where our edges overlap.

My spiritual leadership with Wild Seeds of Torah, Shirat Ha Lev: Musical Prayer Community and, most recently, Shir Ta’ev: Spiritual Direction Program, integrates the Jewish wisdom tradition with other wisdom traditions and epistemologies. I resonate to a passage by Rabbi Sid in Jewish Megatrends where he wrote:  “Many of the young people I meet who are most serious about Judaism are intensely interested in how their heritage compares with Christianity, Islam, Buddhism, and other religions of the world. They explore those faiths, not because they want to convert, but because they refuse to live and learn in an intellectual and cultural ghetto. The ability of these young people to explore faith, politics, ethnic identity, and social responsibility in a religiously pluralistic setting (is) nothing short of transformative.”

I would add that this is true for many older people as well. My parents, may their memory be a blessing, were living at those intersections, which made Judaism vibrant, alive, relevant and meaningful for me. It was that cross-fertilization of different religious and cultural traditions that continues to inform my teaching, learning, rabbinate, chaplaincy, spiritual direction and mothering…mothering as scholarship and spiritual leadership.

Generative Somatics, Embodied Feminist Epistemologies, Aikido (Japanese integration of the martial arts, philosophy and religion) and other body-centered practices are a significant part of my work to support us in healing from trauma and moving to communities of care from the story of self-reliant individualism. Integrating social justice and healing are central to my work with Wild Seeds of Torah, in particular the Shir Ta’ev: Spiritual Direction Training Program that I lead. It attracts Jews and others who want to learn about the Jewish wisdom tradition, allowing participants to trust the body’s knowing and wisdom as we tend to the social issues of building communities of belonging, climate justice, gender equity, racial justice, LGBTQIA rights and nurturing an ethic of care. The kinds of liberatory and emancipatory practices that we practice embrace and embody the deep felt knowing that all of our liberations are tied up with each other. That was a fundamental principle of my Jewish upbringing- we take care of the stranger, of each other.

None of this works unless we can create communities of care and connection to heal the story of separation and isolation, so that we know that we are connected, supported, seen, heard and valued. We need this for our psychological, spiritual and physical well-being. As revealed in so much recent neurological research, we are wired for connection and for co-regulation, so learning, listening, singing, praying and dancing in community matters. In our Shir Ta’ev spiritual direction training we embrace and embody a relational culture, an ethic of care, maternal thinking and meaningful connection, where we can hear/feel and know “the sound of the genuine” (Howard Thurman), hold each other with dignity, agency and inhabit our ongoing becoming (eheyeh asher eheyeh), as we reclaim our humanity and the cultures of connection that we each come from and the shoulders we stand on.

Jews and all peoples are hungry for meaning, for purpose and for being “seen and heard into speech” (late feminist, Christian theologian, Nelle Morton). This is one of the ways that we, at Shir Ta’ev, are reinventing Jewish life. We are also deepening into our ancestral wisdom with technologies we have learned from other disciplines: sacred listening from humanistic psychology; power dynamics from feminist and critical race theory; re-valuing the body from somatics.  In the circles of witnessing that we create, we midwife each other into the more beautiful selves and the more beautiful world that our hearts know is possible. We are a People of the Book. We also are a People of the Body.

Dr. Lori Wynters is the Jewish Chaplain and Educational Studies Faculty at SUNY New Paltz. She also teaches Integrative Social Medicines at Goddard College. Lori directs Wild Seeds of Torah and Shir Taev, and is interested in the ways that we ‘tend’ to other in a relational culture of care and collective healing and liberation.