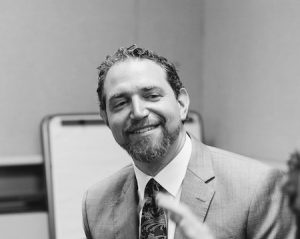 In the late fall of 2016, I was making plans for the next phase of my rabbinical career.  As fate would have it, the morning after Election Night, as Donald Trump crossed the 270-vote threshold in the electoral college, I was preparing to board a plane from my then-home in Oakland, California to the East Coast.  I had a weekend visit to a synagogue in New Jersey, and a Skype interview with a synagogue in Massachusetts.

The weekend was lovely, but it would be that Skype session that led to my current role.  I sat in the basement of a friend’s house in Rockland County, 20 miles north of Manhattan.  The smiling faces on my screen exuded warmth, but it was flecked with distress — and not just because they needed a new rabbi.  The weeks after Trump’s election took their toll on those of us who feared what was to come.  People I knew had been crying.  I had been crying.  In the aftermath of the cataclysm, I had made a promise to myself.  I would no longer apologize for my conviction that to be a Jew was to work on behalf of justice.  I would not look for a congregation that accommodated or tolerated my justice work; I would only take a job in a community that celebrated it.

During the interview, I was asked what I thought were the main jobs of a rabbi.  I replied, “to teach Torah, to build community — and to make justice.”

There would be more interviews to come, of course, but it was in that moment, as I watched the faces of the committee, that I saw something shift.  I could see expressions of anxiety give way to the possibility of hope. Suffice it to say that, four years later, I am proud to serve as the rabbi of Congregation Beth Elohim in Acton, Massachusetts.  We have a dynamic youth education program, a preschool with a waiting list.  And we also have a large and growing social justice team, with a mailing list of hundreds of people.

One congregational team that particularly sparked my interest had formed before I was hired, in the aftermath of the election.  They named themselves Na’aseh — “we will act” — from the story of the Israelites at Sinai, receiving Torah from Moses.  “We will act and we will understand,” they say, committing the Jewish people to making holiness, even before we fully understand it.  “Let’s do something!” read the signature line of the first Na’aseh newsletters.

Of course, it wasn’t always clear what that “something” would be.  At times, the group was confused in choosing the best way forward.  Early on, they had decided on three focus areas, based on the passions of the people who had gathered for the first meetings: immigration and refugee rights; environment and climate change; and, what was called, “social & economic justice and gender rights.”  It quickly became clear that the third focus area was too large.

But as we got our footing, it became clear that this work was helping to revitalize the congregation.  Though the congregation was hiring a replacement for a rabbi who had deep connections throughout the community and was greatly beloved, we saw an increase in interest in the synagogue. The threats to immigrants stirred our collective memories of vulnerable Jews in our families, and throughout history.  Congregants regularly gathered at the ICE office in Burlington, MA for interfaith “Jericho Walks,” drawing attention to the misery being perpetrated by Immigration and Customs Enforcement.  Occasionally we would hold our weekday mincha minyan at the ICE office, drawing even more congregants than we did when it was held at the shul.  While we determined that we didn’t have the facilities to be a sanctuary space, fifteen congregants took regular shifts at a local church, standing guard in support of an immigrant family.

What we found was that people who had been occasionally involved in the synagogue — or not at all — were energized by the work Na’aseh was doing.

One of those activists was Sue Abrams, a retired school administrator who would ultimately become co-chair of our Racial Justice team.  “I spent half my life in a classroom helping people directly, but protesting at the ICE building or the state house was not something I had ever done,” Sue told me. “To be more public about it was new and different.”  Though Sue was self-conscious about this work at first, she became encouraged as she saw more Jews show up to make their voices heard.  “It made me feel like our message is getting out to people.”

While the work was done by congregants, I have heard from a number of people that rabbinic leadership was essential to becoming engaged in social justice work.  “We had never had anybody encourage us to do anything like that,” Sue told me.  “It was at your Torah study that I met Ann Budner” — then the co-chair of Na’aseh.  “She told me what they were working on, and I said I definitely want to join you.” Ann had done a great job of launching Na’aseh along with her co-chair, Barbara Frank Michaelsen.

Other congregants reported similar journeys.  “I am grateful to be a part of Congregation Beth Elohim, which, in the last few years, has awakened in me a greater desire for tikkun olam,” Cindi Silverman, one of our Na’aseh leaders said from the bimah during a Rosh haShanah service.  It gave her a sense of purpose, she added, to take steps, “however small, to bear witness to injustice and to make an effort to provide comfort and support whenever possible.”

Her husband Rick, meanwhile, has begun organizing voting rights efforts, and has taken on the leadership of our High Holiday food drive.  “This is the same guy who would not allow Hebrew words to pass his lips when we were married,” Cindi told me.  “It is the core Jewish values that made him reach out to the Jewish community.”

A congregant who joined the shul after her son pointed her to some of my online writing, Marjie Cahn, summoned me to her house in the aftermath of Hurricane Maria.  She asked me simply, “what are we going to do about it?”  Barely a few months later, we had invited the head of the Jewish community in San Juan to CBE, and raised over $25,000 for hurricane relief for Puerto Ricans of all backgrounds.

Even at the synagogue itself, congregants were increasingly moved to take on national and global problems.  Located west of Boston, many of our congregants are engineers with deep technical know-how and experience.  For many of them, it was natural to look at how our community could address climate change, what Rabbi Arthur Waskow calls, “global scorching.”  Thus, CBE’s Solar Team was born, overseeing the installation of a solar farm in the synagogue parking lot.  As of last year, it was the largest solar installation of any house of worship in the commonwealth of Massachusetts.

Of course, this path is not a simple one.  We have lost a handful of members who did not agree with our decision to pursue Jewish justice on a congregational level.  And some continue to express concern about the direction of the shul, both to me and to the board.  At first, some congregants were worried that this work would “distract” me from the ritual and pastoral work that they saw as my core rabbinic duties.  For many, it seemed that seeing the energy that emerged within the congregation as we took on this work — as well as seeing me in pastoral and prayer spaces over the course of the last four years — largely allayed those concerns.

But another concern emerged. In retrospect, it should have been entirely predictable.  Seeing their loving but largely insular community become, in Sue’s words, “more outward focused” made some congregants uncomfortable.  Would they still be welcome if they weren’t interested in that work?  Would they even “recognize” their old shul?

We’ve addressed this concern in a few ways.  First and foremost, I’ve learned that a lot can be accomplished through, tried-and-true, Jewish love.  While I was clear in my conviction that pursuing justice was a core obligation for every Jew, I made it clear that I would always love and accept everyone as full and equal members of our congregation — just as I would for Jews who rarely attended Torah study or davenning.

Another tack we took was to create a procedure that would allow the congregation to take a public stand.  This emerged out of a decision the board took to support Massachusetts ballot Question 3, which prohibited discrimination based on gender identity in public places such as restaurants and stores.  Some of our congregants, even if they supported a “yes” vote, were surprised to see the shultake a public stance on something that they didn’t see as a “Jewish issue.”  What became clear to me was that we needed to reassure some of our more cautious members that we wouldn’t move “too far, too fast.”

After numerous discussions, we created a policy that clarified a process that allowed for congregational input on issues in which there was a lack of clear consensus on the board.  It was approved by the congregation this past Spring.

It goes without saying that no synagogue serves the needs of every Jew.  It saddens me that a small number of our members left the congregation over our growing social justice advocacy. But the vast majority of our membership has supported this work, and has found a sense of mission — and even healing — within it.

It testifies to the power inherent in the pursuit of justice, not only for our communities, but also for our souls.  For those of us who work for tzedek, for justice, there is uplift.  Not just a fleeting, “feel-good” moment, but — in an enervating and exhausting world — a sense of purpose and place and resolve.

And, of course, it reminds us who we are as Jews, because it is — as it has always been — a Jewish imperative.  Or, in Marjie’s words, “If one is a Jew, how can one not do this work?”

Rabbi Michael Rothbaum is spiritual leader of Congregation Beth Elohim in Acton, Mass. He serves on the advisory boards of the Jewish Alliance of Law and Social Action (JALSA) and the New England Jewish Labor Committee and is a member of T’ruah: The Rabbinic Call for Human Rights. He lives in Acton with his husband, Yiddish singer, Anthony Russell.

« How a Mr. Rogers Ministry Guided My Pandemic Rabbinate*