Cultivating Communities of Obligation: An Alternate Path to Commandedness 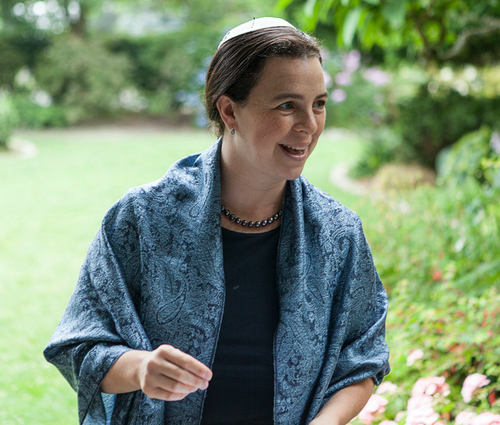 I have distinct memories of my rabbinical school interview more than 20 years ago. I sailed smoothly through discussions about my Jewish background and why I wanted to go to rabbinical school, and then squirmed uncomfortably as I struggled to answer a theological question posed to me around the topic of commandedness. While my religious practice put me squarely inside the range of acceptable observance at JTS, I struggled mightily with the “v’tzivanu” (“commanded us”) language of blessings.

I had (and still have) a hard time believing that the reason for me to do any of these things was because they were what God commanded; I have never had such a sense of clarity about God’s will that I feel certain that I know what God is asking of us, ritually. However, the practices that have emerged from Jewish law and tradition have always compelled me for a variety of reasons: for example, I “opted in” to a more stringent kashrut practice as a teenager when I started to sense that it was good for me (cultivating discipline and a higher level of consciousness around my food choices) and highly connective (meaningfully linking me to my great-grandparents, to my broader Jewish community, and to Jews around the world today). Since I made this commitment at age 15, I have never looked back… I’ve never eaten treif meat, or mixed meat and dairy. I have set up a kosher kitchen with multiple sets of dishes in which I’ve hosted countless meals for a wide range of guests. In other words, this obligation – a commandment I took upon myself – has bound me for decades, in a way that has been just as powerful for me as theological commandedness may be for others.

All of this backdrop must have been swirling somewhere in the back of my head in 2006 when I founded Kavana, an innovative Jewish community in Seattle, Washington. The Pacific Northwest is known as a laid-back region… and not a particularly God-centric place. Nor is it a place where religious obligations have a hold on the vast majority of the population. And yet, co-founder Suzi LeVine and I had a clear hypothesis: that the more one puts into a community, the more one will get out of it. As we dreamed about building our new Jewish community, we saw our work as somewhat “retro”; we were trying to integrate some of the best features of Jewish communal models like shtetl and kibbutz with the very individualistic landscape of contemporary American society. The new Jewish community we wanted to build was one with a sense of neighborhood, an alive and lived everyday Judaism, and a dense social fabric… and in order to do that, we needed a community model that could have binding force.

The more we workshopped the idea together, the more we were attracted to a cooperative model that encouraged opting in to a system of obligation. We were inspired by a number of local cooperatives of various types: business “co-ops” like REI (which sells outdoor gear); PCC (a local food cooperative); Seattle’s many neighborhood-based preschool co-ops; and Social Venture Partners (a venture philanthropy group that requires volunteer service of its members). The icing on the cake was a meeting we had with Rabbi Anson Laytner. We described our ideas to him, and he shared with us an article he had published in the early 1980s entitled “Food for Thought: The Jewish Cooperative Society (Or a Havurah With Teeth),” a theoretical piece that he claimed had fallen on deaf ears at the time. Together we decided that perhaps the time had come, a quarter-century later, to try to revive the cooperative concept he had written about and to put it into action.

For the past dozen years now, Kavana has functioned as a cooperative community, calling on people to self-obligate by joining. In doing so, they become “partners” (as opposed to “members”) – signifying their sense of ownership in the community – and take on a set of obligations which include annual financial support, volunteer roles, and regular (at least monthly) attendance.

In this post-modern age, I believe it makes sense that the new version of commandedness is an opt-in model. And, in general, we’ve found that people take these self-obligations quite seriously. Partners might volunteer by hosting a Havdalah Club event in their homes, leading or coordinating a program (whether a Shabbat Minyan or a Book Club), taking on simple tasks like greeting or clean-up at any of our events, or taking on much bigger infrastructural roles (from financial planning to serving on a Communications Team). At our Annual Partner Meeting each spring, we ask that every household send at least one representative, and while we’ve never achieved perfection, the vast majority of partner households actually do show up, making this one of our most well-attended, interactive and powerful community-building events of the year. We know that many synagogues and other Jewish organizations also place a strong emphasis on volunteerism and participation, and I don’t want to suggest that Kavana has cornered the market in these areas. However, at Kavana, what is distinct is that these modes of engagement are all framed as obligations. Because people have all opted in by joining the co-op, we can meaningfully speak the language of commitment.

Over time, we have continued experimenting and tweaking some of the details. For example, we’ve played with the language we use to talk about partnership and the cooperative model, always striving to balance the seriousness of the commitment with our need not to scare people off. Our board has discussed at length the questions of whether to institute minimum contributions for money and/or for time (for now the answer is still “no” to both). We’ve also played with the partner intake and renewal processes, adding new features as the community has grown. We are ever trying to improve upon the model. Nevertheless, we can report with certainty that the cooperative model holds great power and great potential. Kavana’s very high rate of engagement – both in terms of participation and in volunteerism/ service to the community – has demonstrably driven people to feel a sense of ownership around their own Jewish identity. And, in our diverse community where we can’t necessarily assume sameness in Jewish background or observance, commitment has become a great equalizer among our partners. This has been particularly important for those community members who come from non-Jewish backgrounds, who report feeling fully included by virtue of having taken on the same obligations as everyone else.

At present, many Jewish communities are exploring alternatives to the classic mid-20th century synagogue membership model. It seems that many synagogues are looking to attract more people through the loosening of obligations and the lessening of expectations. This may be working in some places, but at Kavana, we have consciously moved in the opposite direction over the past twelve years, enough to claim proof of concept. Requiring more of our partners and inviting people to opt-in to a more intensive level of obligation has proved quite compelling (pun intended!).

If I were interviewing for rabbinical school today, I imagine that I would still squirm a bit if pressed about theological commandedness. But, I know that I would have far more confidence in the belief I’ve long held: that self-obligation is possible, and that commitments taken on in this way can have deep and lasting impact.

Rachel Nussbaum is the Rabbi and Executive Director of the Kavana Cooperative, an innovative Jewish community in Seattle, and a founding member of the Jewish Emergent Network.

« Re-imagining Synagogue Worship » Pittsburgh and the “Awe” of Safety