WITNESS ON WHEELS: A Pastor and a Rabbi Travel in a Journey of Discovery

When feeling overwhelmed — immersed and implicated — in the complex, amalgamated legacies of the United 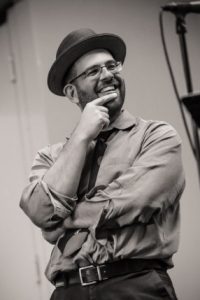 States, it is best to phone a friend.  Involving Rev. Dr. Daryl Horton, Youth Pastor/Assistant to the Pastor at Mt. Zion Baptist Church in Austin, Texas in my inquiry and interrogation of my place in this country immediately sharpened the focus of my existential investigation – what does it mean to inherit the various legacies of the United States?  What responsibilities, privileges, and perils do I have as a Jew, navigating both current events and encountering the ghosts on the various frontiers as this country expanded?  How am I situated in justice work – crafting a path, intellectual and activist, that enables me to be a spiritual leader and a role model for my community?

As Rev. Horton and I spoke, our friendship began to come alive.  We had met initially in our service to our community – serving together in interfaith work – I, as president of Interfaith Action of Central Texas; Rev. Horton as president-elect.  Encouraged by the 2018 openings of the Legacy Museum and the National Memorial for Peace and Justice in Montgomery, Alabama, we conceived of a road trip together – to visit and see what would happen along the way.  As we listened to each other, we quickly realized that our time together would be as impactful as our somber witnessing of the history of racial inequity and economic injustice of the United States.  We rapidly saw too, that our questions possessed mutuality – and we would adventure together to seek some partial answers.

At the same time, we realized that we were traveling not only as friends.  We were traveling as an example to others – encouraging others to find their path, invest in friendship and be open to conversations that are honest, sometimes difficult, and regularly more revealing than what we regularly choose to represent to each other.  In our initial trip, we visited the Holocaust Museum in Houston, and then made our way to New Orleans – a place where I lived and had substantial experience.

We grounded our first days of travel in my experience – the specter of the Holocaust that informs so much and so many in my community – and then going to a place where I grew up and learned to listen to the music that was birthed there – the sound of jazz which sings the story of much of America in a syncopated rhythm.  I realized that the assumptions that I made were incorrect – standing with Rev. Horton while he gazed at the pictures of death camp survivors was harrowing – and I realized that what I took for granted in my worldview (this atrocity), was not as well known outside of my circle.  We had a lot of work to do together.

In all sorts of stormy, summer weather in the South, we bore witness in Selma, Montgomery, Birmingham, Memphis, and Little Rock before returning to Austin.  Our conversations were revealing and after a few days of absolute togetherness, we realized that this journey was far beyond our own discovery.  It was about crafting a relationship of trust and vulnerability.  We chronicled our trip in both written and video form and, when we returned, we were able to personally share our experiences with others – including Rev. Horton speaking from my pulpit during the High Holydays.

We also realized that the systemic issues of oppression that have defined our country know no borders.  We planned a trip to the North in the summer of 2019 to witness and demonstrate how economics, politics, and moral choices are linked to the painful histories that we had seen in the previous summer.  We saw the true roots of the financial district in New York – Wall Street built atop a marketplace for enslaving people – while we rejoiced in the story of my family coming through the hesitantly open gates of Ellis Island.  Beaming in the upraised torch of the Statue of Liberty, we grieved when we saw that there was no marker at Pier 17 that recorded this place on the East River as a disembarkation point for thousands of Africans who came to this land in chains.  We saw skyscrapers built on forgotten African burial grounds.  We walked the historic streets of Weeksville, a place in Brooklyn that housed a free Black community.  We entered 770 Eastern Parkway (international headquarters of the Lubavitch Chasidim), to glances of curiosity, suspicion, and ultimately brief encounter.  We stood at the corner of President Street and Utica Avenue – the flashpoint for the Crown Heights riots in 1991, and we made our way to Peekskill, NY, tracing the steps of the vicious riots that occurred there in 1949.  In addition, we shared some days in Boston, honoring Crispus Attucks, the first person to lose his life in the Boston Massacre, heralding the beginning of the American Revolution.  Walking the storied campus of Harvard University, we spoke about the Faustian bargain on which Harvard Law School was built – funded by the estate of Isaac Royall Jr., one of the most successful 18th century colonialists and slave owners in the Boston area.

This year, we had planned to head West and visit sites where the last decades of war against the Native Americans was waged – ground that is still weeping in Colorado, Kansas, South Dakota, and Oklahoma.  Alas, the pandemic has kept us at bay.  We are pivoting, recognizing that there is plenty to witness in our own backyard of Texas – seeing the development of Texas as a republic and as a state in the Union.  Exhibiting the battles, knotty decisions, and dubious principles employed to launch the US-Mexican War, we see that this tempest in a teapot is our national conversation in miniature. As Ulysses S. Grant wrote towards the end of his life: “The US-Mexican War was one of the most unjust ever wages by a stronger against a weaker nation.  The Civil War was our punishment for that transgression.”

There is still so much to encounter, and our road continues to run long.  We encourage each of you to do the same.  Reserve significant time with a potential friend and jump into difficult yet replenishing conversations about identity, legacy, and responsibility – and go explore.  These efforts will support a friendship through times thick and thin – and will encourage others to put the efforts into crafting relationships that are life-long and not steeped only in the urgencies of these pleading moments.

Check out our work: https://www.facebook.com/witnessonwheels

Neil F. Blumofe is Senior Rabbi at Congregation Agudas Achim in Austin, Texas. He also is on faculty at the Austin Presbyterian Theological Seminary and has a weekly podcast, Liner Notes, which speaks about the significance of jazz and spirituality. Neil is a member of the national mentor team for the Clergy Leadership Incubator (CLI).

« Jew it at Home: A New Business Model for Jewish Institutions